REFLECTION: THE IMAGE OF SOPHIA 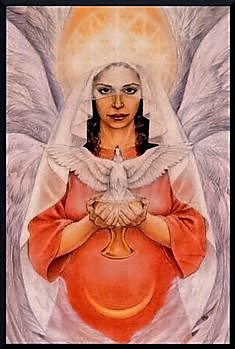 Pay attention, those that meditate

Upon me, and listen well!

All of you who are patiently waiting,

Take me to yourself!

Don’t dismiss me from your mind

And don’t let your inner voices

Despise me; don’t forget me at any

Time or place; be watchful!

I am both the first and the last,

I am both respected and ignored,

I am both harlot and holy.

I am wife and virgin, mother and daughter.

I am the unfathomable silence,

And the thought that comes often,

The voice of many sounds,

And the word that appears frequently.

I have been hated everywhere

I am that which people call

Life and you call death.

I am called the Law

I am the hunted and the captured.

The dispersed and the collected.

But have many feasts.

I am ignorant, yet I teach.

I am despised, yet admired.

I am the union

For I am the one

And I have no-one

Who will judge me.

The lines above have been extracted from an old Gnostic text usually known as Thunder: Perfect Mind. It is part of a collection of fourth century texts known as the Nag Hammadi library, discovered in Egypt in 1945 though not published until 1978. They were buried towards the end of the fourth century, a time of intensified Christian Orthodoxy in the Roman Empire when it had become dangerous to own them. As well as Thunder, the collection includes the Gospel of Thomas, the Gospel of Mary Magdalene and the Gospel of Philip. After over 1500 years of burial, these texts are now once again widely known and appreciated. They might not have appeared at all but for the staunch championship of C. J. Jung towards the end of his life.

Generally, Thunder is thought to be about Sophia, who despite her Greek name is a figure from Jewish tradition – a disregarded voice of wisdom, culturally descended from the dethroned Goddess of Israel. In Christian Gnostic tradition, she is partly reinstated both in the myth of Sophia as a cosmic figure and alternative understanding of Mary Magdalene as a human one. This is one of the main reasons why these texts were suppressed. Thunder goes furthest, in identifying her as supreme being and beyond judgement –  unusual even in the paganism of the day. She also says, “I am the bride and the bridegroom”, calling to mind the Gnostic valorisation of the androgyne as symbol of aware wholeness.

Thunder has many themes: the Goddess and what she stands for; contested understandings of gender, social relations  and religious expression; recognition and non-recognition; the vulnerability of wisdom and spiritual insight in human communities; dualities and the non-duality they are seen to be hiding. In the historical life of Thunder, one toxic duality was to be the co-arising of widespread literacy and systematic censorship. For the Gnostics, there was no redemption to be had in history – only in the transcendent light of a realised Divine identity.

I don’t fully know why Sophia became a numinous image for me. Culturally her Gnostic story is compelling. I notice that I am not interested in the Sophia of Orthodoxy, where wisdom is the wisdom of submission (to God, church and Christian monarchy). Nor am I drawn by Sophia as a Romantic, or Jungian, symbol of the ‘divine feminine’ – with archetype as stereotype writ large. The image of the Gnostic Sophia came to me when I was working within a Pagan context and feeling uninspired by gendered north European deities, with the partial exception of Brigid. In any case, I didn’t want to lose touch with the near eastern traditions, especially in this dissident form from Alexandria, which I felt to be part of my spiritual culture. Whatever the reason, Sophia entered my heart and imagination in a way that no other named and anthropomorphised deity has ever done. She became the perfect patron for a contemplative inquiry, taking on especial significance in the final year, when I talked about a ‘Way of Sophia’.

I still keep the icon close to me, and intend to continue doing so. But two recent dreams suggest some withdrawal of presence and energy. Not in a bad way – it’s more like fare-welling a companion or guide at the end of a journey. I am left with gratitude, inspiration, memory – and some continued sense of connection. This post is a way of honouring her.

Mostly I have selected the text above from the Alan Jacobs translation in The Gnostic Gospels published in London by the Watkins Press in 2005 as part of a series entitled Sacred Texts. However this translation is both free and  incomplete, and for my last four lines I went back to the third revised edition of The Nag Hammadi Library in English published by Harper San Francisco in 1990, with James M. Robinson as general editor.

Artist Hrana Janto at http://hranajanto.com/ (The image at the top of this post is used with her permission.)