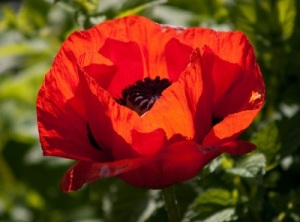 “We call the poppy ‘vanity’ and we write it down as a weed. It is humiliating to think that, when we are taking ourselves seriously, we are considering our own self-preservation, or the greater scheme for the preservation of mankind. What is it that really matters? For the poppy, that the poppy disclose its red … Seed and fruit and produce, these are only a minor aim: children and good works are a minor aim. Work, in its ordinary meaning, and all effort for the public good, these are the labour of self-preservation, they are only means to an end. The final aim is the flower, the fluttering, singing nucleus which is a bird in spring, the magical spurt of being which is a hare all explosive with fullness of self, in the moonlight; the real passage of a man down the road, no sham, no shadow, no counterfeit, whose eyes shine blue with his own reality, as he moves amongst things free as they are, a being; the flitting under the lamp of a woman incontrovertible, distinct from everything and everybody, as one who is herself, of whom Christ said, ‘to them that have shall be given’.

“The final aim of every living thing, creature, or being is the full achievement of itself. This accomplished, it will produce what it will produce, it will bear the fruit of its nature. Not the fruit however, but the flower is the culmination and climax, the degree to be striven for. Not the work I shall produce, but the real Me I shall achieve, that is the consideration; of the complete Me will come the fruit of me, the work, the children.

“And I know that the common wild poppy has achieved so far its complete poppy-self, unquestionable. It has uncovered its red. Its light, its self, has risen and shone out, has run on the winds for a moment. It is splendid. The world is a world because of the poppy’s red. Otherwise it would be a lump of clay.”

When reviewing Nature Mystics – https://contemplativeinquiry.wordpress.com/2015/7/6/  – I mentioned D.H. Lawrence and Thomas Hardy as two of the named writers who had become part of my life during my teens. I also wondered how far such free spirited people can be enrolled as ‘properly’ proto-Pagan as suggested by the author. This passage is certainly very Laurentian. In modern terms, it seems to connect with the current conversation about ‘wildness’ rather than religious Paganism or nature mysticism, though of course these are all interconnected. I have certainly enjoyed revisiting Lawrence’s words after a long absence.  They were written early in 1915, with the red poppy simply representing abundant life, and so before its memorialising significance became marked. Lawrence was just under 30 at the time of writing, with  just 15 years left to him.

Reflections of a meandering Hedge Druid

faroutzen.wordpress.com/
Down the Forest Path