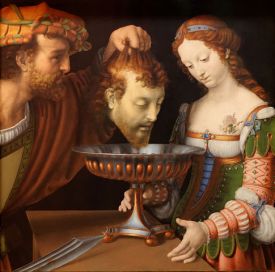 24 June is a special day for me. When I was quite small, someone told me that it was Old Midsummer’s Day without telling me when the new one was. So it was Midsummer’s Day for me. ‘Old’ just gave it depth and perspective in my imagination. I was told in the presence of oak trees too, in a sun-ripened afternoon , sultry like high summer. Old.

A year or two later I found out that it was St. John the Baptist’s Day too. I had two vivid images of him at the time. The slightly less vivid one was of him baptising Jesus, the anointed one who was to follow him. The slightly more vivid one was a version of Andrea Solari’s depiction above (1507): John beheaded as requested by Salome, at the command of King Herod. It is a strange story in some ways, for Salome means ‘peace’ in Semitic languages and she’s not depicted in an obviously peaceful light.

In any event, the church awarded John the Baptist 24 June as his day, placed at the opposite end of the year to Christmas, days which are in each case placed at a time when the sun has just started moving again. The old story about the conflict of a winter and summer king alternating in their mirror image enjoyment of dominance and death is now somewhat discredited as a universal theme. But it is clearly a strong part of our cultural inheritance, just like our experience of the changing seasons themselves.

Old Midsummer’s Day is a time when the sundered halves of the western way come together, with a common theme handled in different ways and with different understandings.  That, and the fact that the day has been present in my imagination since I was very young, give this day a special kind of magic. I was glad to mark it today with my partner Elaine, in a completely informal way.