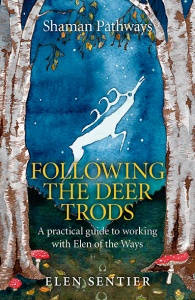 The full title of this book is Following the Deer Trods: a practical guide to working with Elen of the Ways. It is written as part of Moon Book’s Shaman Pathways series, and is positioned as a stand-alone introduction to its topic, which includes working methods for the aspiring practitioner. As such this book certainly meets its criteria.

I personally think it works best in tandem with Elen Sentier’s other book on the topic, also a Shaman Pathways book, Elen of the Ways; following the deer trods – the ancient Shamanism of Britain, which I reviewed in July 2014. This earlier book establishes the overall context much better and for me they belong together.

Following the Deer Trods begins with a summary of the ideas offered in Elen of the Ways. This works well, even magically, in the opening pages – but I was saddened by a seeming loss of perspective when we get to the Romans and beyond. The author shows no recognition of Christianity as a diverse, complex and internally contested path, not least in the Celtic lands; or of the effects which holding political power can have on religious traditions, regardless of the actual faith. There’s also no clear flagging of the extent to which the positive, Pagan side of the story is necessarily reliant on intuitive reconstruction, relevant records being sparse and problematic, oral traditions highly mutable over time, and material remains providing only limited insight into hearts and minds. There is so much we don’t know, and will never know, about our ancestors, their traditions and what it was like to be them. When talking about them, we do best to avoid the language of certainty.

For me the book picks up from that point, providing the promised guide to working in a series of well-organised practice chapters. The main areas covered (in my language) are meditation, energy work, service, shamanic journeying, relationships with familiar spirits (power animals), and working with trickster figures. The author also discusses the ‘journey horse’ or method of trance induction – and the relative merits for this purpose of drumming, the sound of waves, rain, or a flowing stream; the steady roaring of wind; the recorded purring of cats. That bit of the discussion is a true gem, reflecting a lot of playful trial and experience.

These chapters also lay out a basic cosmology for the work – a cosmology of three worlds (middle, lower, and upper) on the vertical axis and four elements radiating out from the middle world on the horizontal, with the nigh universal notion of the world tree/tree of life very much in mind. Elen describes the image of the six armed cross as a means of bringing them together. She talks about her understanding of the inner world of the journey as a place of ‘interface’, the portal which she, as awenydd, and the Otherworld co-create as a meeting place between them.

The instructions for practice are highly specific and directive and therefore best-suited to people who are new to this kind of work, who don’t have access to hands-on teaching or established learning communities, and who need nonetheless to be strongly held as they begin their exploration. Other readers will look to the offerings provided as a source of new or variant ideas, or information about a specific way of working.

My heart didn’t sing, when I read this book, as it had when I read its predecessor. But it makes its contribution and, with the one significant reservation about the presentation of history, I’m happy to recommend it.