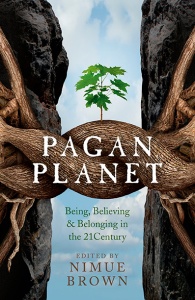 “For this reason I am doing what I do, working towards …. the more beautiful world our hearts know is possible”. Simon Wakefield is a biologist, Druid and contributor to Pagan Planet: Being, Believing and Belonging in the 21st Century. He talks about the “most profound experience of my life” when observing a nesting sea turtle on a starlit Greek beach. “Putting aside all the requirements to measure and monitor I decided just to be present, and I opened up to an experience of deep time and an ancient longing by another creature simply to be, to express its uniqueness, which has never left me”.

For me, Simon has expressed a point of unity in this diverse collection of essays edited by Nimue Brown and published by Moon Books. The authors come from a variety of Pagan traditions, though with a tilt towards Druidry. Many stand witness to a growing movement of Pagan activism, where people find themselves involved in the demanding, draining and potentially perilous work of resistance, protection and defence. The value of Simon’s words (which he attributes originally to Charles Eisenstein) is to keep an eye on the prize: “the more beautiful world our hearts know is possible”. Beauty, of course, depends on our ability to perceive, name and cherish it. Reading the essays in Pagan Planet, I come away with a sense of this as a unifying Pagan commitment.

What moves me most, I think, is an overall sense of resilience and optimism – not so much an optimism of calculation as an optimism of the heart. In his piece about the foundation of PaganAid, Ian Chandler says: “I have heard people’s stories that make me cry, I have seen destruction that has brought me to my knees with despair. But I have also met people whose dedication against all odds fills me with awe. I have seen achievements that make me want to sing and dance in the street. Now is not the time for us to give up on the future – it is time for us to decide what we want and to make that future happen”. Edwina Hodkinson talks about the frontline herbalism of the Wild Sistas in anti-fracking protection camps. “We dispensed tinctures, teas, creams, cough syrups, health advice, general nurturing and lots of first aid. Protectors who had been injured from interaction with the police wanted treatment for badly bruised ribs and groins, sprained wrists, and grazes … people had great faith in what we did, compliance was good and the results of the herbs spectacular … I’ve come to believe that when we go out of our comfort zones and are prepared to make some kind of sacrifice for ourselves and the earth, the earth responds and works with us”. One of their successes was the ‘warrior drops’ created to deal with trauma, stress and anger on the front line. “Protectors said that these really made a difference in calming them down” and one said “it grounded him and reminded him why he was doing the protest”.

A number of the essays stand witness to the creative energy of Pagan vision and life practice at this moment in history. These include Lorna Smithers’ visionary evocation of Castle Hill, Penwortham, described as “a magical place, in spite of the damage”, whose “alternative story” has been passed on “by its spirits, by decree of the fay king”. Hearth Moon Rising says that “my vision for some time has been to ground modern witchcraft more completely and more concretely in the natural world, to create a deeper understanding of what it means to have an animistic practice”.  Other people are exploring roads less travelled, like Laura Perry in Walking the Modern Minoan Path or Calantirniel in Working with Tolkien, where part of the purpose is to integrate the “Christ energy” into a Pagan path. Irisanya from the Reclaiming tradition offers a piece on Lifestyle/Work/Relationships which is centred on overlapping considerations of gender and peer communication and the magic of knowing how to track the energy in a conversation, when to listen, when to speak up and how to be supportive of voices that are not being heard. There are a number of pieces about the family context, including supporting dependent elders and raising children. In The Teachings of Children, Romany Rivers reports that people ask her whether her spirituality affects her parenting; her view is that it’s the other way round – her parenting affects her spirituality. “I realised how one small person’s emotional state can impact an entire environment. I have learned more about Reiki from working with my children during times of pain and stress, peace and snuggles. I have discovered new reasons to meditate. I have reconnected with the power of imagination. I have found new creative expressions”. She concludes, “I believe that is my children who are Pagan, and it is they who raise me.”

There is much more. I’ve got a piece called Living Presence in a Field of Living Presence: Practicing Contemplative Druidry. I would certainly have thought of it as supporting “the more beautiful world that our hearts know is possible” at the levels of perception, recognition and cherishing. But I didn’t think of it, and have only done so now as a result of reading the rest of this book: the value of community! Because of my involvement, I’m not going to review the book outside this blog or award points. I hope instead that I’ve been able to demonstrate something of its energy, diversity and commitment – and that the Modern Pagan movement from which it comes.

Ways to become more grounded and spacious with yourself and others, through your own body’s wisdom