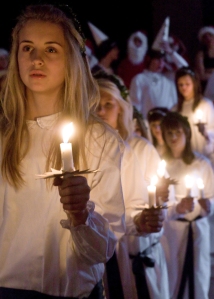 Saint Lucy’s Day is on December 13, part of Advent in the Christian year. I’m posting early because I will be spending the next week or so off the internet.

This feast once coincided with the Winter Solstice, the shortest day of the year before calendar reforms. Her feast day has become a festival of light, something that modern Pagans would perhaps more readily associate with Imbolc. St. Lucy’s Day is celebrated as a major feast day in Scandinavia with its long dark winters.

Lucy is called Lucia and is represented as a woman in a white dress and red sash with a crown or wreath of candles on her head. In both Norway and Sweden, girls dressed as Lucy carry rolls and cookies in procession as songs are sung. Even boys take part in the procession as well, playing different roles associated with Christmas. It is said that to vividly celebrate St. Lucy’s Day will help one live the long winter days with enough light.

I have tended more to link the day to a very different response to the day – John Donne’s poem A Nocturnall Upon St. Lucies Day, Being the Shortest Day. This was composed in the 1590’s, well before calendar reform in England.

The poem is linked to a personal bereavement as well as the season. I share the first two verses. They are very much about the young poet’s own experience, rather than the season or the one who has been lost – though in a sense both the poet’s feelings and the poem itself are a service to her. The words themselves give the dark its voice, capturing the moment of desolation fully, and holding it. They do not move on to any culturally expected renewal, but rather to an alchemical anti-renewal instead. If there is any redemption it is in the writing itself, the expression. Donne was a good English writer in a time of good English writing.

Tis the yeares midnight, and it is the dayes,

The Sunne is spent, and now his flasks

The worlds whole sap is sunke;

Dead and enterr’d; yet all these seeme to laugh.

Compared to mee, who am their Epitaph.

Study me then, you who shall lovers bee

For I am every dead thing.

In whom love wrought new Alchimie.

For his art did expresse

A quintessence even from nothingnesse,

From dull privations, and leane emptinesse:

Of absence, darkenesse, death; things which are not.

thehagofthetweed.wordpress.com/
The Blog of Baphomet

Musings of a Scottish Hearth Druid and Heathen

Thoughts about living, loving and worshiping as an autistic Hearth Druid and Heathen. One woman's journey.

Witchcraft as the crow flies...